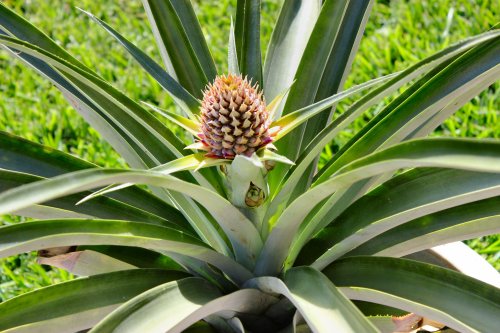 Just wanted to give you a quick update on the baby pineapple’s progress. It’s Day 25, and I am blown away by how quickly she’s growing. Yes, I said she. I have decided our first baby pineapple should be classified as a female, since she has the potential to spawn 2 more pineapples after this one, as well as additional plants from the shoots that will be emerging soon. Her name, therefore, shall be La Piña Saparot, a combination of names suggested by readers Toffee Marshmallows from the United Kingdom and Patricia DeWit from Thailand. The name may be redundant, since both words mean “pineapple”, but as the mother of my future pineapple farm, she deserves a name so nice you say it twice.

Click on the photo for a close up, then hit the “back” arrow to return to the post.

This week, the stalk supporting her is growing taller, and the “buds” for future shoots are starting to bulge from the stalk. There are three of them, and according to the Hawaiian Ag Site, we will need to cut some of them away in order to promote the growth of a second pineapple fruit (known as a ratoon). The good news is that those shoots, called suckers, can be planted to create new pineapple plants. The biggest news of the week is the flowers that are starting to bloom from the base of the pineapple. A few rows of these purple/blue flowers should gradually bloom over the next 2 weeks. Once they die back, the fruit begins to flourish and eventually ripen. I can’t wait to see how she progresses! 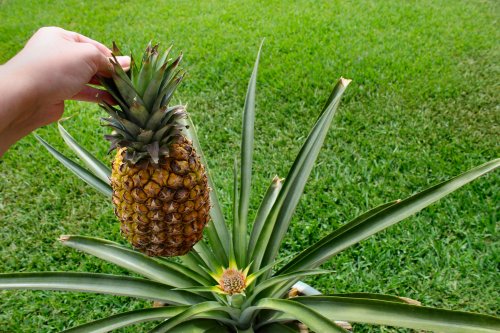 On a separate note, we thoroughly enjoyed the pineapple I received from the kids on Mother’s Day. You know… the one I used to punk readers into thinking the baby was fully grown? Well, I made sweet & sour chicken for dinner last night with big chunks of my Mother’s Day pineapple, and it was delicious. The good news, however, is that we planted the top and started a new pineapple plant. One’s a novelty, but two’s a farm. I think I will call this one Spike.