Confession: I don’t know jack about motorcycle racing.
But I know someone who does, and that someone is my beloved husband, The Complete Package. Earlier this month, TCP and I went to Austin so he could attend the MotorGP event. While he was at the racetrack, I played with the grandkids. And thus we reveal the key to a 32-year marriage – compromise.

Because TCP had a great time, I thought it would be fun to share a few photos from the races on the off chance some of you enjoy it as well. The following photos were taken by The Complete Package at the MotoGP Austin event:

Here’s what I do know:
1. The Complete Package is a Valentino Rossi fan.
2. Our grandkids love everything TCP loves because they love him.
3. Lilly Bug is now in love with Valentine Rossi (all the ladies are).
4. Jonah Bear thinks Marc Marquez rocks because he’s the fastest in the world.
5. This next shot is of their favorites – Rossi (blue/green) & Marquez (black/orange/white).

Valentino Rossi makes the fans go wild. People are crazy for this Italian racer, and I get it. He’s a maniac on a racing bike, has enough personality and charm for 10 racers, and is a world champion many times over.

But then there’s the up-and-comer, Marc Marquez. This Spanish biker is young, aggressive, and taking the racing world by storm. He is also the current World Champion and the winner of the Austin MotoGP event. How fast is he? Well, his top speed at the Austin event was clocked at 341.6 km/h. That’s 212.3 miles per hour. {gulp!} I. Cannot. Fathom. I wonder what his mother thinks about it. 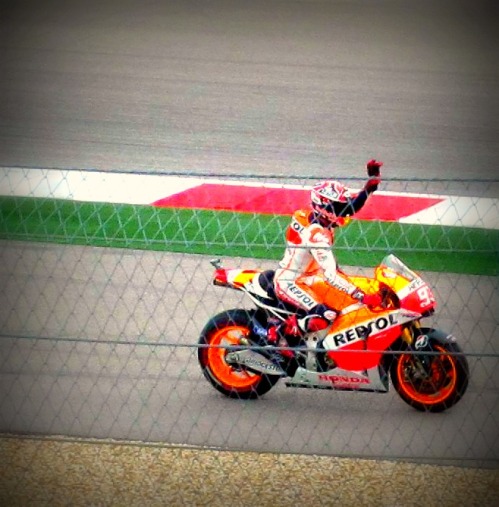 Three days of fun & sun at the Circuit of the Americas track was just enough for TCP. He had a blast, saw all the qualifying rounds and races including the big finale, and has the sunburn to prove it. Jonah Bear & Lilly Bug both got racing shirts (hers is a Rossi; his is a Marquez), got to hit the new Luby’s near the house, and spent some time in the hotel hot tub and at the park with their mother & I. We also hit Sandy’s Frozen Custard, so basically a great time was had by all. 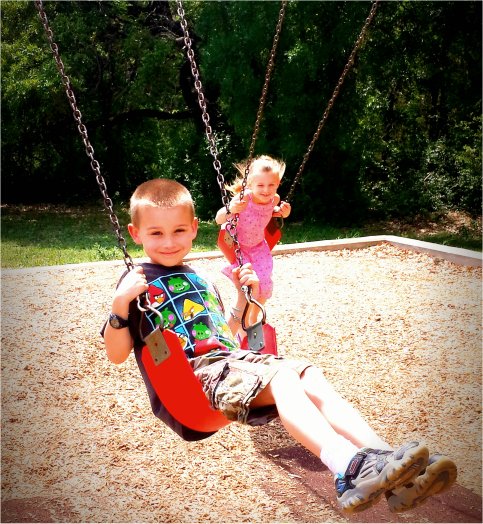 Okay, I lied. I took that last shot of Jonah Bear & Lilly Bug. But just that one.
#TruthInAdvertising #GratuitousGrandkidShot #HashtagAttack #NotSorry

Note: The Complete Package wanted me to point out that some of these photos were taken early on Friday during qualifying rounds, which is why the stands might look empty or sparse. For Saturday’s events and Sunday’s final races the racetrack was packed with spectators, as those in attendance can attest.