My Baby ran her first half-marathon!

That’s right. My daughter is a rock star! After running a handful of 5Ks and one 10K, our daughter took on her first half-marathon and not only finished, but did it with a big smile on her face. Seriously… who runs 13.1 miles and still has a smile on her face? That’s right – My Baby! 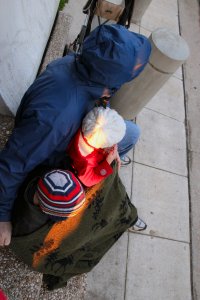 TCP & the grandbabies bundled up

The Complete Package & I took Jonah Bear and Lilly Bug to the race so they could see Mommy run. Getting them up and dressed at 5:30am was not their idea of fun, but once we were out on the course staking a claim on a great vantage point (& unpacking breakfast snacks), they started to get more excited. It was freezing cold, or at least felt like it, but it was important to us to be there cheering from the sidelines and documenting her first half-marathon experience. It was so worth the cold and wind when the kids saw Mommy running up the street at Mile 3. I have to admit, I got excited, too. Once that first runner and his escort passed, it was a blur of runners for a good solid hour.

Here are a few snaps of the runners we cheered for until My Baby and her friend Lindsay ran past. I was amazed at the diversity of runners. 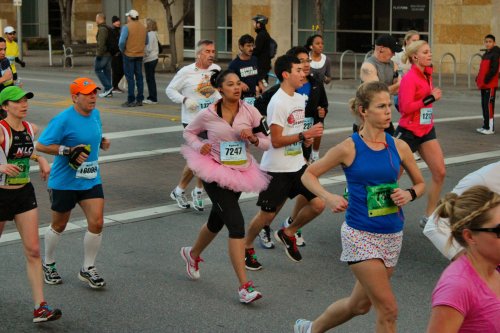 I don't know this girl, but she gets my vote for "Best Dressed in a Tutu" 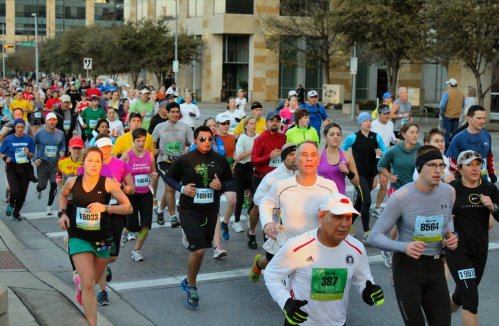 This "Beer Run" sign was wildly popular with runners.

Coming into view at Mile 3 - all smiles and pure awesomeness

Hi, girls! We're all so proud of you two! Whoo Whoo!

This is where they stopped to have their picture taken (that first photo above). We were at the bell tower on Cesar Chavez near City Hall. It was a perfect vantage point for the early part of the race, and it was just far enough from the start line that they could shed their outer layer of clothing and leave it with us.

Once they were past us, we gathered up the kids, hit the port-o-potties (TCP has a special place in heaven now for taking 2 toddlers into portable toilets on a race course), took a stroll around downtown Austin, and made our way to the First Street bridge, where we saw the girls cross the river at Mile 8 – still smiling.

I snapped of a few quick shots of them coming across the river at Mile 8 before they spotted our son-in-law and his friend Marcus directly across the street from us. They rode their bikes to the race, and pretty much trailed the girls along the course. It turned out to be a perfect way for them to cheer the girls on, but also mule all the gel packs and energy bars they might need along the route. 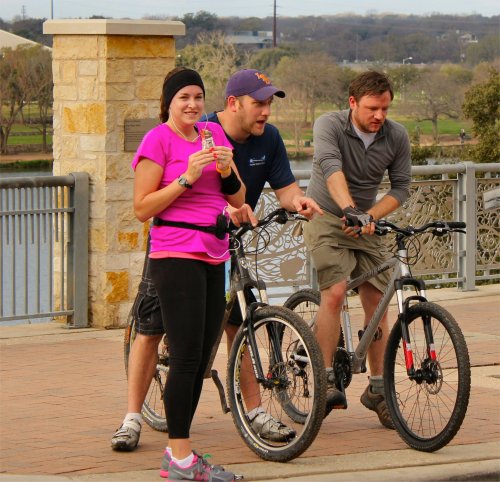 It was right after this point that the kids hit the wall. Jonah Bear was tired and Lilly Bug was frozen like a popsicle. Her little hands were like ice. We agreed to meet the kids later for a post-race lunch and we headed home to give the babies a break and let them thaw out. At lunch, the girls celebrated with giant beers and a platter of carbs. They laughed at the looks they got walking into Pluckers in their full running gear and medals, but who cares? They had an awesome time, and met their goal – to finish together in under 3 hours. Their final time as they crossed the finish line side by side was 2:39:37.

Smile, ladies. You're about to win your 13.1 badge of honor.

I’m no expert, but I think that’s pretty awesome for a first half-marathon, and we couldn’t be more proud. As we celebrated over lunch, we asked our daughter if she would ever shoot for the full marathon. She immediately said, “Oh, no way! I can’t even imagine it!” Then I reminded her that she said the same thing about moving up from a 5K to a 10K, and from a 10K to the half-marathon. Her response? “Good point, Mom!”

24 responses to “My Baby ran her first half-marathon!”