“You’re the BEST PAPI EVER!”

This summer, The Complete Package participated in the Republic of Texas motorcycle rally in Austin, Texas. One of the best events during the rally is a motorcycle parade that runs from the fairgrounds to Congress Avenue in downtown Austin. For this event, Congress Avenue from the state capital building to the river is closed. Motorcycles leave the fairground in the early evening and create an 11 mile-long motorcycle parade into downtown, past the capital, and onto Congress Avenue. That’s 11 solid miles of motorcycles, riding 2 across, involving thousands of bikes. It’s an incredible sight to behold.

This year, My Baby and I took the kids to Congress Avenue to see the bikes and watch their Papi ride in. We cheered, we bought big sparkly light-up wands for the kids, and we waved at all the riders. As the bikes filled Congress Avenue, the riders parked, got off their bikes and walked around. Bikers swapped stories, families visited friends, and grown-ups and kids alike walked around looking at motorcycles, ooo-ing and ahhh-ing over their favorites. This year, Jonah’s favorite bike involved custom LED lights that flashed and changed colors. He thought it was the coolest bike, and the gentleman that owned it was kind enough to let him sit on it and have his picture taken. He loved that.

Fast forward to this August when TCP decided to install LED lights on his new motorcycle. Lights that flash and change colors and do all kinds of cool things. So when Jonah Bear came for his week-long summer visit (Jonahpalooza), TCP waited until nightfall to take him out to the garage for a little surprise. As Jonah and I watched, TCP turned off the overhead light and with the push of a few buttons on a hand-held remote, he blew Jonah Bear’s mind. It started with “Whoa!” and morphed into “Cool!” and ended with a giant bear hug and a booming “You’re the BEST PAPI EVER!” For me, it was ‘cue the waterworks’ but for Jonah Bear it was ‘cue the rock-n-roll music’ as he launched into a spontaneous air guitar performance the likes of which I have never seen. 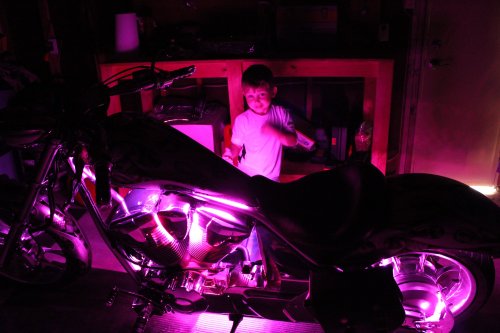 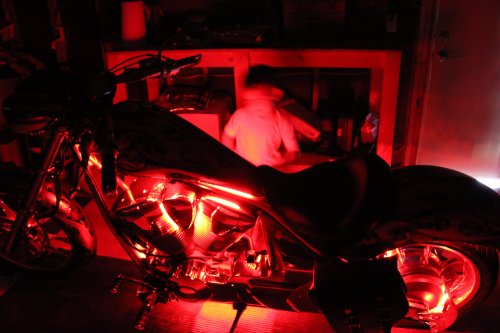 Have I mentioned lately that I love this kid to pieces?