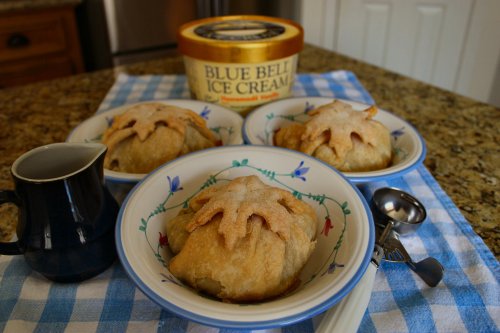 There’s no recipe here, at least not formally. I just wanted to share this photo of the apple dumplings I made today. We’re having our friend Kaki over for dinner, and I made these for dessert. Thought she’d like them. They’re just Granny Smith apples that I peeled and cored, then stuffed with a mixture of softened butter, cinnamon and sugar. That pie crust was made from a batch I had in the freezer. When I make pie crust, I like to make a big batch and freeze some for last-minute stuff like this. I cut out a leaf for each with a cookie cutter, brushed them with melted butter, then sprinkled them with sugar. It’s just that simple. You don’t even have to use homemade pie crust. I’ve done this same thing with those Pillsbury rolled crusts from the dairy case. Nothing goes better with hot apple dumplings than Blue Bell Homemade Vanilla ice cream. Man, that’s good stuff. To top it all off, I bought a small bottle of local MacIntosh apple cider, mixed in a little cinnamon sugar, and reduced it down to about 3/4 of a cup. Now it’s cinnamon apple cider syrup. That’s going over the top of the ice cream and dumplings right before I serve them. Mmmmm…warm apple dumplings with vanilla ice cream and cinnamon apple cider syrup. This is one of the many things I love about fall. Well, this and flannel pajama pants.
Advertisement